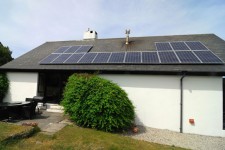 The system will provide about 4,200 units of electricity per year – much of which guests can use in house to run dishwashers and washing machines. Any excess will be exported to the grid – for use by others. 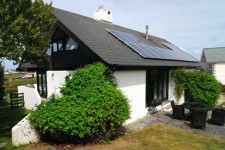 Cornwall is the best place in the UK for PV installations – and with good Government grants (Feed-In Tariffs) available and guaranteed for new installs over 25 years, payback on the £7-17,000 needed for such a system is around 7 or 8 years. 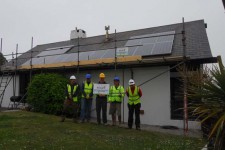 The system was installed by It Won’t Cost The Earth, who are a sister company of Raintree House Holidays.

It Won’t Cost The Earth install all over the UK, and are different to other suppliers in asking their customers to use their online survey to help specify their own system.

It Won’t Cost The Earth’s team of experts, using tools such as Google Earth, and talking through with the customer at every step, then provide a very competitive quote along with designs and comprehensive financial projections for the next 25 years. Only high quality components are installed, using the best quality technology and local teams overseen by on-site IWCTE project managers.

What do you need? A roof of around 10 to 45 sq metres; a lack of shade for all or most of the day; and an orientation from East round to West – with of course due South being just perfect! Morvoren’s roof is fully south-facing and huge – lots of power!

Expect to see plenty more PV around North Cornwall and the UK!

Read more about the Morvoren Photovoltaic PV Solar System – May 2011.